Does the idea of cycling on tracks though wild areas littered with volcanoes, salt flats, amazing wildlife, and remote villages appeal to you? Cycle touring in Bolivia and Chile poses its problems but the rewards easily compensate.
Tom Phillips and Phil Whiting describe a record breaking journey.

"The main aim of the ride was to get to the top of a 20,000 foot [Andes] volcano I had seen in 1992. However we wanted to start from sea level and cycle through some of the amazing scenery in this part of South America. The 10,000 square mile Salar de Uyuni ( salt lake ) and the 15, 000 foot high Lago Chungara (reputedly the World's highest lake ) attracted our attention and in the end we settled on an 800 mile route starting in Arica in Northern Chile. We also wanted to raise money for and awareness of Intermediate Technology. This Charity helps develop and promote the use of appropriate Technology, practical solutions to everyday problems. The charities slogan 'Small is beautiful' seemed to fit in with the lightweight and independent approach of our expedition."Have a look at our detailed route map

Arriving in Arica, at midnight, after 60 hours of non-stop travel from the North of England, we were pretty shattered. However after a short nights sleep were got organized, Univega bikes assembled and kit packed in Carradice panniers. By mid afternoon we had dipped our toes in the Pacific and set off, first North before turning right just before Peru ! This takes you into the Lluta Valley, a wedge of green driven into the desiccated sandy slopes of the Atacama Desert. We were surprised to find that 23 pleasant miles later we had climbed 2,000 feet. A steady sea breeze had been pushing us up the almost unnoticeable slope! We had brought an inner tent, stove and sleeping bags to allow us to appreciate the spectacular and unusual camping possibilities. Our first night under canvas was by a desert graveyard 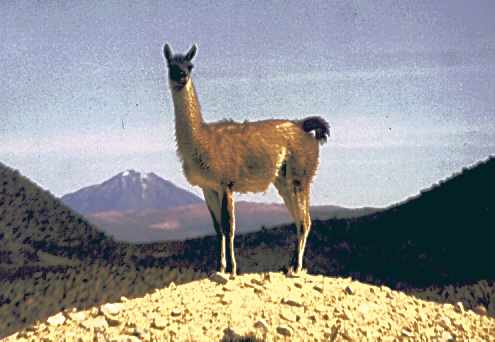 Our second day saw us climbing steadily but surely above the coastal valleys, through the completely arid zone between Lluta and the tiny settlement of Copaquilla. There was no water available for this 40 mile section which climbed relentlessly to an altitude of 12,000 feet. The only plants were the strange candelabra cacti which gained moisture from summer fogs. The only animals vultures which eyed us with interest when we rested in the fierce midday sun. August is late winter here, the days are short and hot, and at night the temperatures plummet immediately the sun goes down. 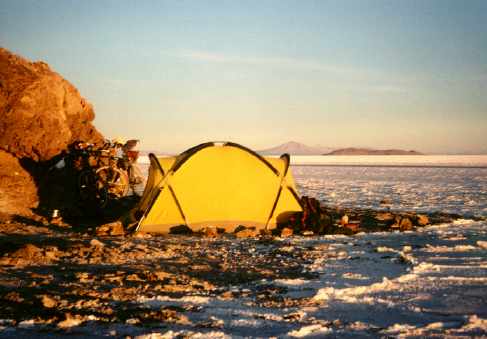 Minus 10° was a common low. Water bottles turned rock hard overnight so it was important to keep them in the tent. We found a travelers oasis at Copaquilla, a roadside cafe recently set up by a couple determined to prove that life was possible at the edge of the desert, through careful use of alternative technology, sun and wind power, and storage of seasonal rains Above 3000 meters plants and animals are able to survive due to snow and rain in December and January providing a limited amount of water. Altitude through provides the cyclist with the challenge of thin air and reduced oxygen levels. You have to breathe more and due to dry air you dehydrate very quickly. At least four or five liters of fluid are needed per day to fend off the mountain sickness or "soroche" as the South Americans call it. Diamox tablets can also speed up your body's acclimatization. We took rest days at 10,000 feet and 12,000 feet before making our bid for the world's highest lake and our route into Bolivia, passing the 15,000 foot mark. 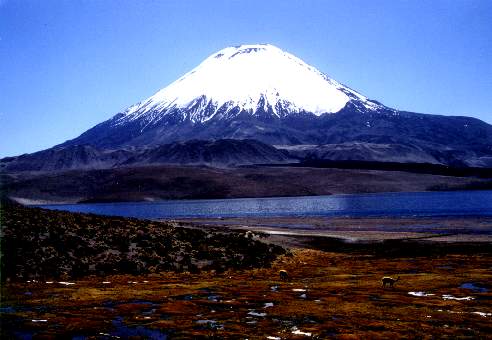 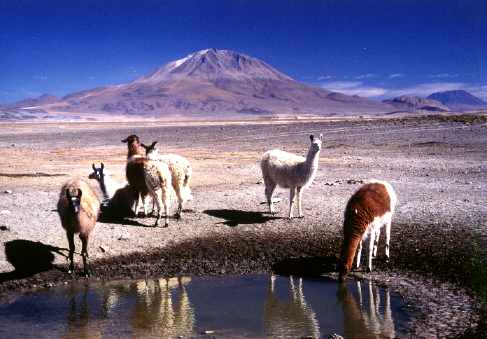 A region of multicolored lakes and streams sits between dozens of volcanoes of the cordillera oxidental. This strange primeval landscape is inhabited by an equally odd collection of plants and animals; giant moss that looks soft and inviting but is as hard as rock; cushions of grass that may seem like a good place to pitch your tent but are as prickly as cacti. Llamas, alpacas and their wild ancestor, the vicuna graze in large groups. If you're lucky you'll see condors. The lakes are host to an amazing variety of wildfowl including stunning pink flamingos. The road through Lauca leads you to Lago Chungara. On its far shore you exit Chile and head over towards Bolivia, and real adventure! Forget tarmac, only a tiny fraction of the roads in Bolivia have a proper surface. Don't expect to average more than 12 mph, 8 or 9 is nearer the mark on the loose gravel tracks pounded into corrugations by lorries and buses.

We were approaching the salt lake (Salar de Uyuni) , still unsure of whether we could cross it. People we met probably didn't realize our alternative was an equally long cycle over sandy tracks. The man in the tourist information in Uyuni however said "No Problem" to each of our questions about our route. 24 hours later we had set off. First we had to backtrack to the small village of Colchani over rough tracks, but as the sand finally ran out and the salt took over we were on a perfect surface for 95 miles. We had never done anything like it, vast scenery of white and blue. A fifty-fifty split between earth and sky, with volcanoes peeping above the horizon. An occasional van load of tourist scuttled past, but as the first afternoon wore on, we had it to ourselves. Water was a rare commodity on 'the lake', so each of our bikes was loaded with 12 kilos of water. It was to be over 100 miles before our next supply ! We camped on Inca Island in the center of the Salar and the night time temperature dropped as low as we had experienced, a chilly -12°C. We slept under the dazzling stars in perfect silence and left the next morning unsure of our next source of water and food. 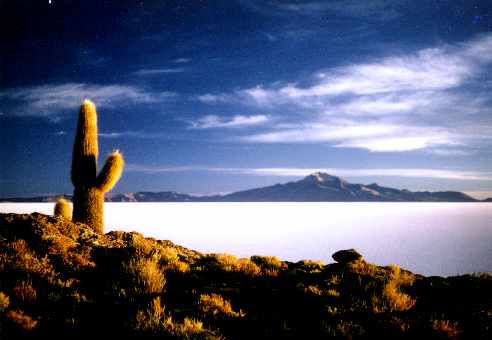 Wild-Life and SurvivalWildlife was not a major part of our trip. Insects were thankfully very few and far between. Birds were either solitary or crowded together on the few lakes. We did see a strange big eared mouse at one camping spot, but Llamas and Vicunas( a humpless South American Camel ) were the most common and did their best to graze the arid scrub. They survived were a Welsh hill sheep would have starved. The scarcity of animal life made for memorable appearances. An osprey, a condor, 4 woodpeckers, 2 ants, and a horse fly. I can place them all. Flamingos made a wonderful splash of color as they moved together on the isolated lakes. It really felt like nature at the edge of its abilities to survive in the harsh conditions of a dry land. 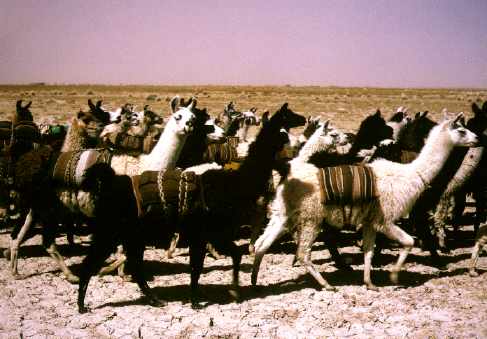 Hola Turista!
[Bolivian] People that we met had generally been very friendly and usually interested in our project. The routine was for them to ask where we had come from, where we were going to and which country we were from. We met different types of people that one would expect to find in any country; old miners returning from work; lorry drivers hooting horns; the lazy family who ran a cafe and swept the rubbish into a pile on the front doorstep and left uneaten food on the tables; the proud lady with a welcoming smile who ran a clean cafe (we had 2 egg and tomato rolls and big cups of coffee from her); big parties of school children who would surround our bikes; individual cyclists riding on cheap Chinese bikes who would stop and shake our hands. 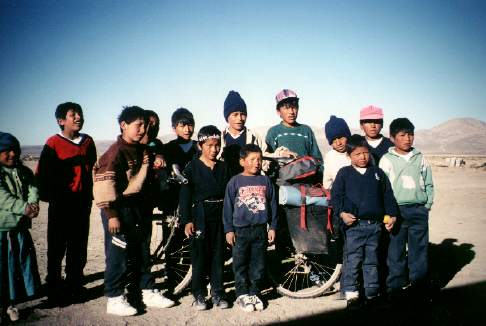 At times we had immersed ourselves in our journey and forgotten that the summit of the volcano was our objective. But as days passed into weeks, as the salt lake was crossed, the landscape again subtly changed, and we arrived on a plain in between two 20,000 foot volcanoes. We were on schedule and ,after half a day's rest, set off up our mining track with enough food and water for three days. The distances were not great but the altitude began to tell as we camped at 14,000 feet on the first night. The colors and lighting at sunset were outstanding, and the altitude gave us maximum sunlight, and a longer day. At 17,000 feet, the next night the air felt thinner still. We would have stayed a day here if we had had enough water. Here we camped at the old mining camp, now just a few ruined buildings slowly being engulfed by the wind blown dust. 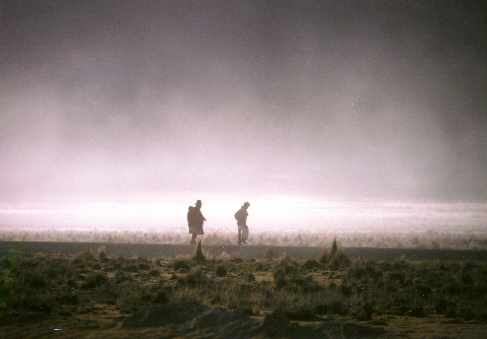 The cycling stopped over this height. Beyond here as we set off there was much sand on the track which was well built and swept up the hillside in zigzags. We passed nervously under crumbling yellow cliffs of sulfur. The altitude told us that it was no foregone conclusion that we would reach the top. Our acclimatization had been good however and a further three hours saw us near the summit. 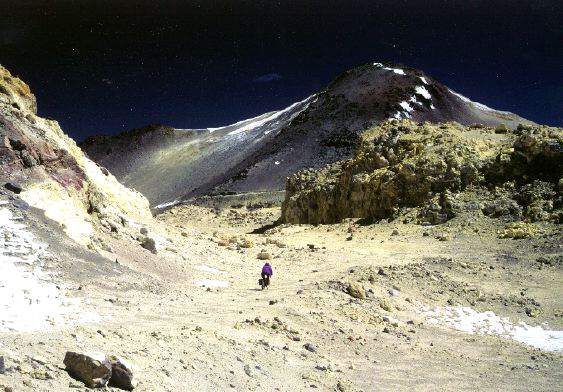 Suddenly we pulled over the domed top and a vast panoramic scene of salt flats, volcanoes and blue skies lay before us. Our dream had become a reality! We stayed on top for about 20 minutes and we descended to 13,000 feet that afternoon. We had a real feeling of having completed a well-planned trip. Motivation had been the quality that had enabled us to take on the challenge and complete it, leaving us with a vivid memory of our route through the harsh landscape in this part of Bolivia and Chile. It was now time to head down and back to our familiar world. The 7,000 foot descent down the volcano to our camp for the night was our only real stretch of downhill, so we made the most of it. What had taken us 3 days to cycle up took us 3 hours to descend! 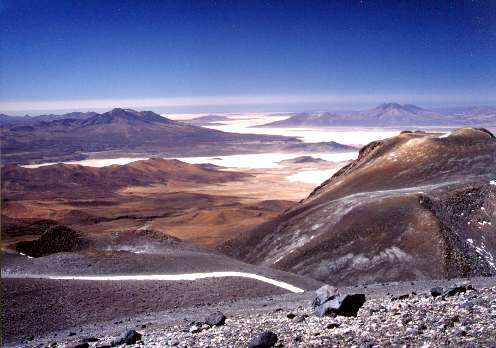 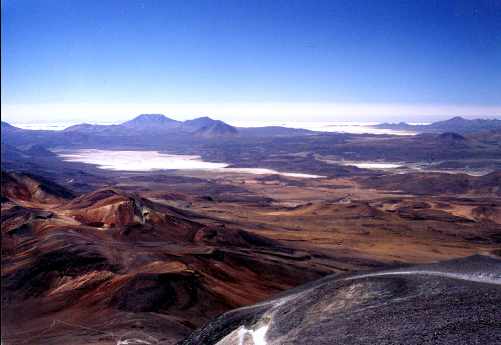 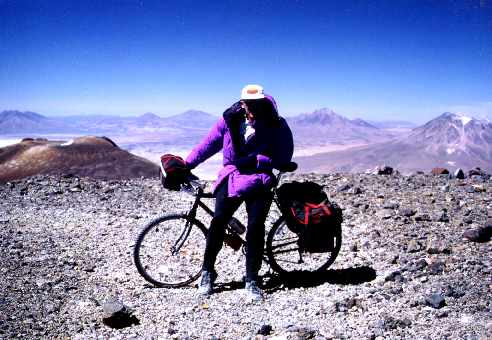 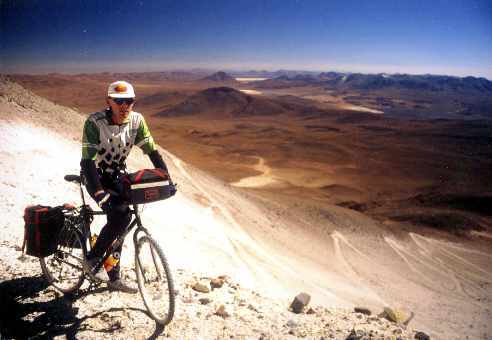