My friend Phil asked me if I had a weekend free at the end of February, a quick trip to Scotland to do some Munros. He said he had the accommodation sorted and the train tickets could easily be organised. After a rather hectic week an early departure from Lancaster saw us heading to Blair Athol with bikes and enough food for 3 nights and days. The freebie newspaper in Glasgow had the North East of Scotland as full sun for the Saturday, perhaps our luck was in?

Before 1pm we were cycling up Glen Tilt with a stiff tailwind after failing to find any open cafés in Blair Atholl and making do with a few sandwiches and a very dubious pack of cream donuts from the local shop. Despite taking a route on the wrong side of the valley (which joined the correct route after a scenic detour) things were going really well and the weather was very mild for late February. The idea was to cycle to the end of the track (12 miles) and then walk in to a hut (known in Scotland as bothies) which would be our base for three nights. The westerly wind was funnelled up the valley and pushed us up the gentle slope, whilst a couple we met cycling the other way were having a real battle.

The steep climb out of Glen Tilt 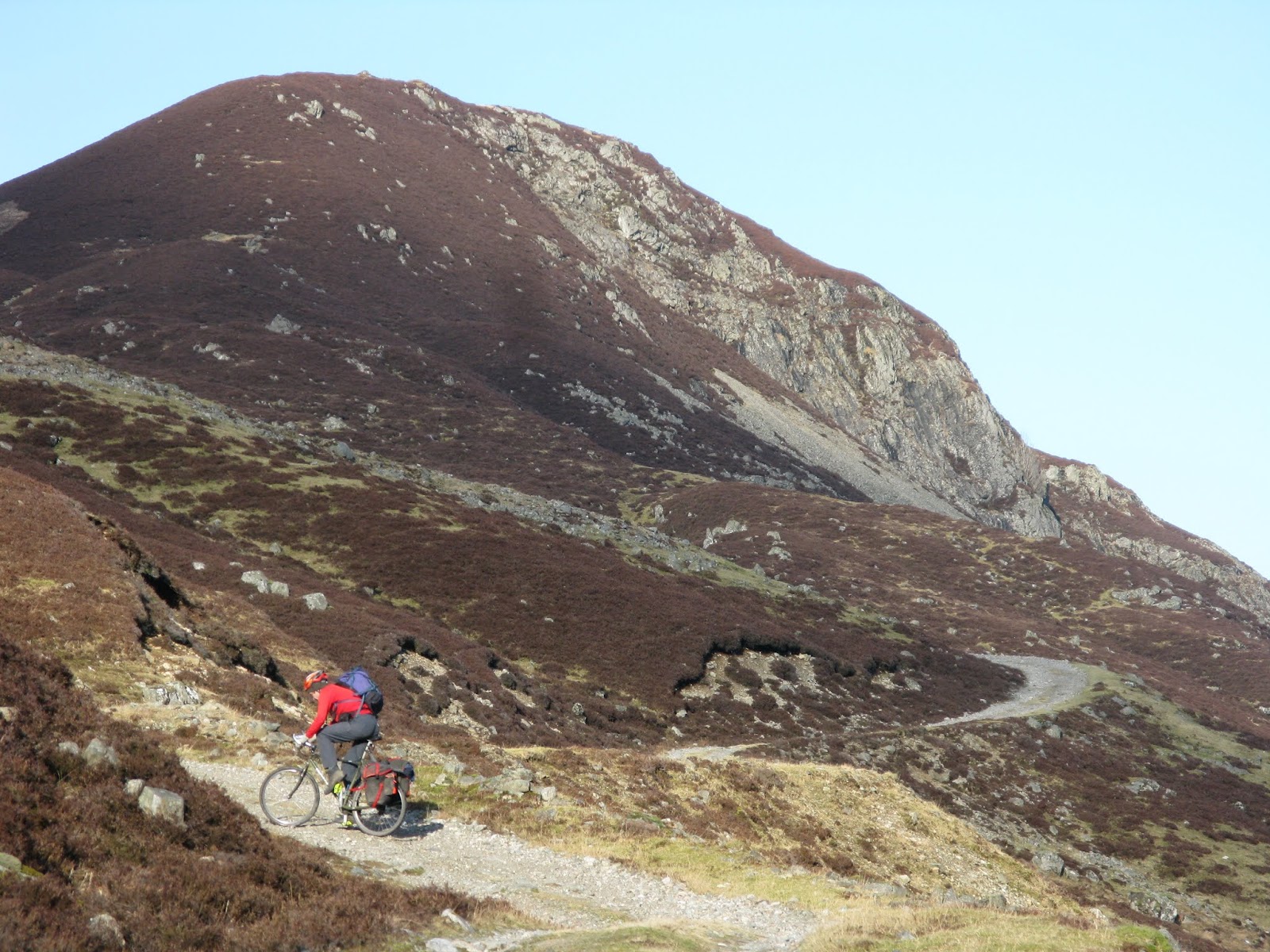 A steep climb over a pass on the last section of the ride led us to a rapid descent to the end of the track. The remaining 2 (ish) miles was walking so we left our bikes locked up and made our way up the vague path beside the river with panniers and rucksacks. It was fairly boggy going and with an attempt to cut a corner resulting in a mile of tussocky heather by the time the bothy came into view we were quite tired and also relieved. 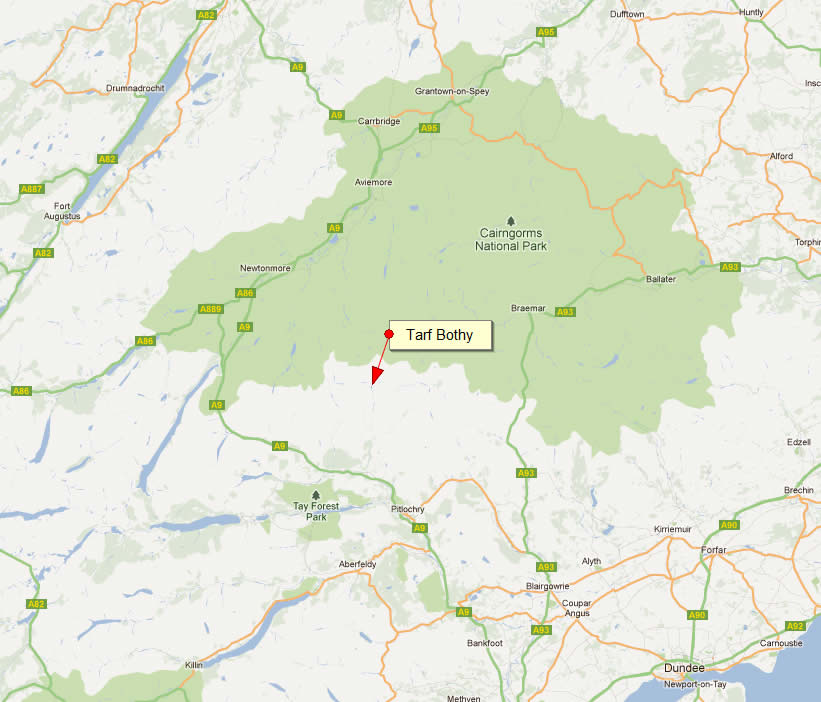 The final obstacle was to balance across a plank spanning a fast running stream, a set of walking poles really helped here. The solid granite walls and new roof gave the building a sturdy appealing look but even the best kept bothies are extremely basic shelters. Our bothy, the Tarf Hotel, was built in a very odd location and obviously suffered from flooding several times a year. The floors were wet and if anything it was colder inside than out. With no source of wood within many miles (apart from soaking wet tree roots in the bogs of the nearby hills) we were in for a few cold nights! We chose a recently refurbished room with a sleeping platform big enough for 2 people, and a couple of chairs and a table. After a few warm drinks and a snack we felt much happier and settled down for the night. 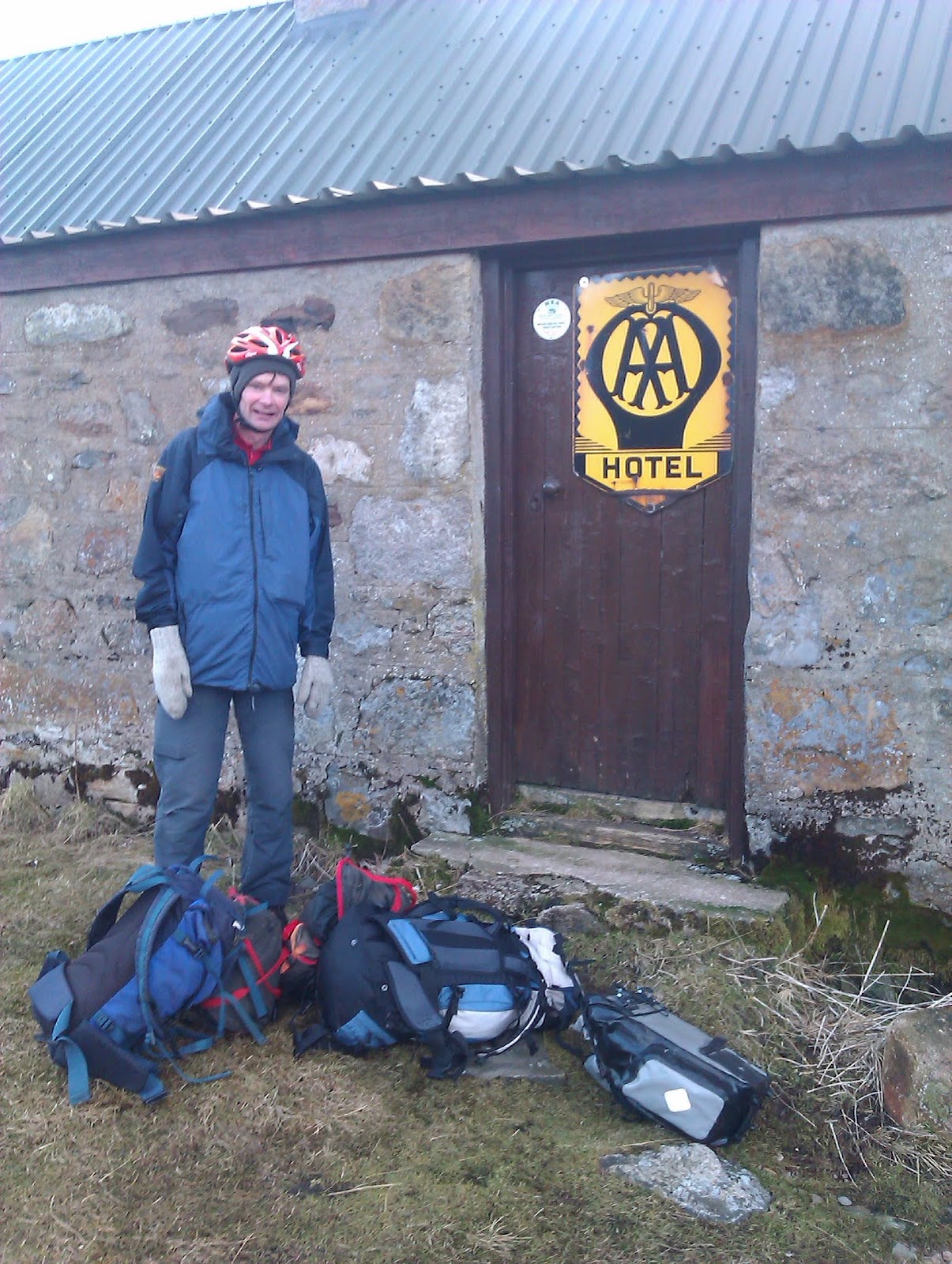 I soon realised that even with a bivvy bag on top my sleeping bag was woefully inadequate in the fridge like climate of the bothy and spent a pretty uncomfortable night awaiting the dawn and a few hot drinks and hot porridge. My deflating thermarest didn't help matters either so it was with relief that I noticed the first sign of daylight, albeit rather grey.

The temperature gauge on the GPS showed 0.9 celcius, no wonder it had felt so cold! I had even slept in my duvet and hat. Phil got the jetboil stove going and plied me with warm drinks and I started feeling human again after a while.

Phil had a big day planned with possibly 4 munros to the north but all widely spaced so potentially 20 miles plus over mostly trackless terrain. We marched of at a good pace and via the first peak we descended over some snowy patches to the Geldie Lodge, a ruined hut in another equally desolate valley. A short food stop and we carried on over rough moorland towards Ben Bhrotain which at over 1100 metres was a long ascent. We were surprised to see people at the frozen and very windy summit, but it wasn't a place for friendly chatter, just a quick discussion about the best way off.
Descending from the arctic conditions we found a sheltered resting point and checked our progress, we were averaging 4kph so if we kept to that pace we could take in another munro on the way back. Straight line navigation over rough trackless terrain was not easy going. 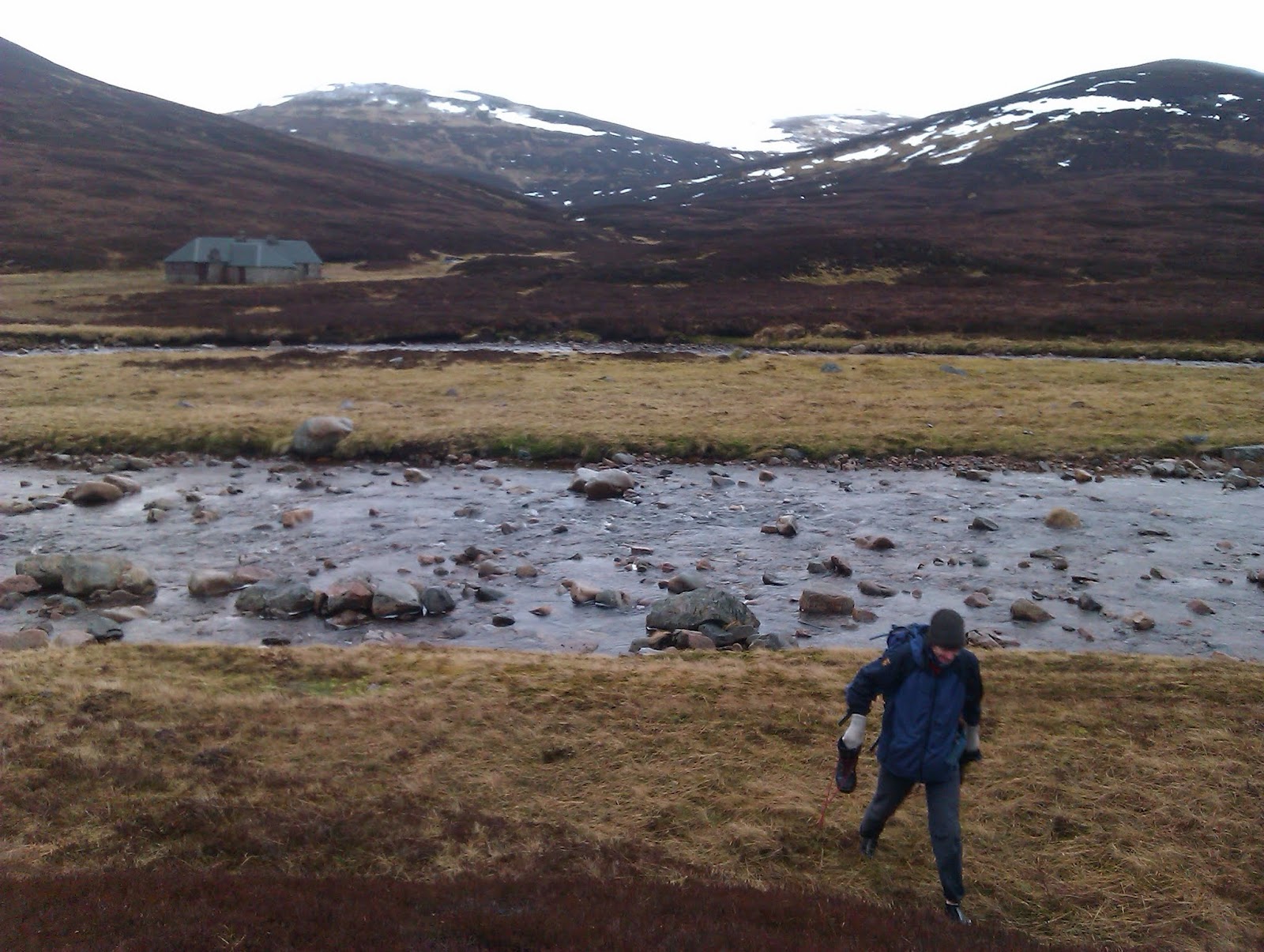 We did spot a few mountain hares in their all white winter coats as well as ptarmigans, buzzards and many chuntering grouse. Descending from our last summit of the day we met three walkers who were also going to stay at the bothy, they had got second choice of rooms at the Tarf Hotel!

Having covered over 32kms (20 miles) we were pretty hungry so fed ourselves well on pasta, cake and custard and after several hot drinks I put on as many layers as I could to stave off the inevitable cold night ahead. The temperature already was hovering at just 1.9 celcius. I kept warm enough but my sleeping mat which had needed an emergency repair went completely flat and so a second uncomfortable night was endured.

Cooking in the Bothy 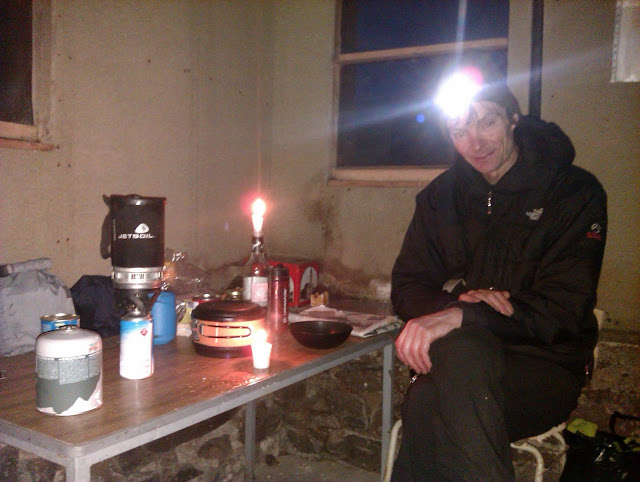 The next day Phil suggested we head East to two munros back across Glen Tilt. This seemed a reasonable proposition but our tired legs had had enough by the time we got to the heather clad slopes beyond Fealar Lodge and we decided to head back to the bothy via an alternative route, we would still cover 28kms (18 miles) 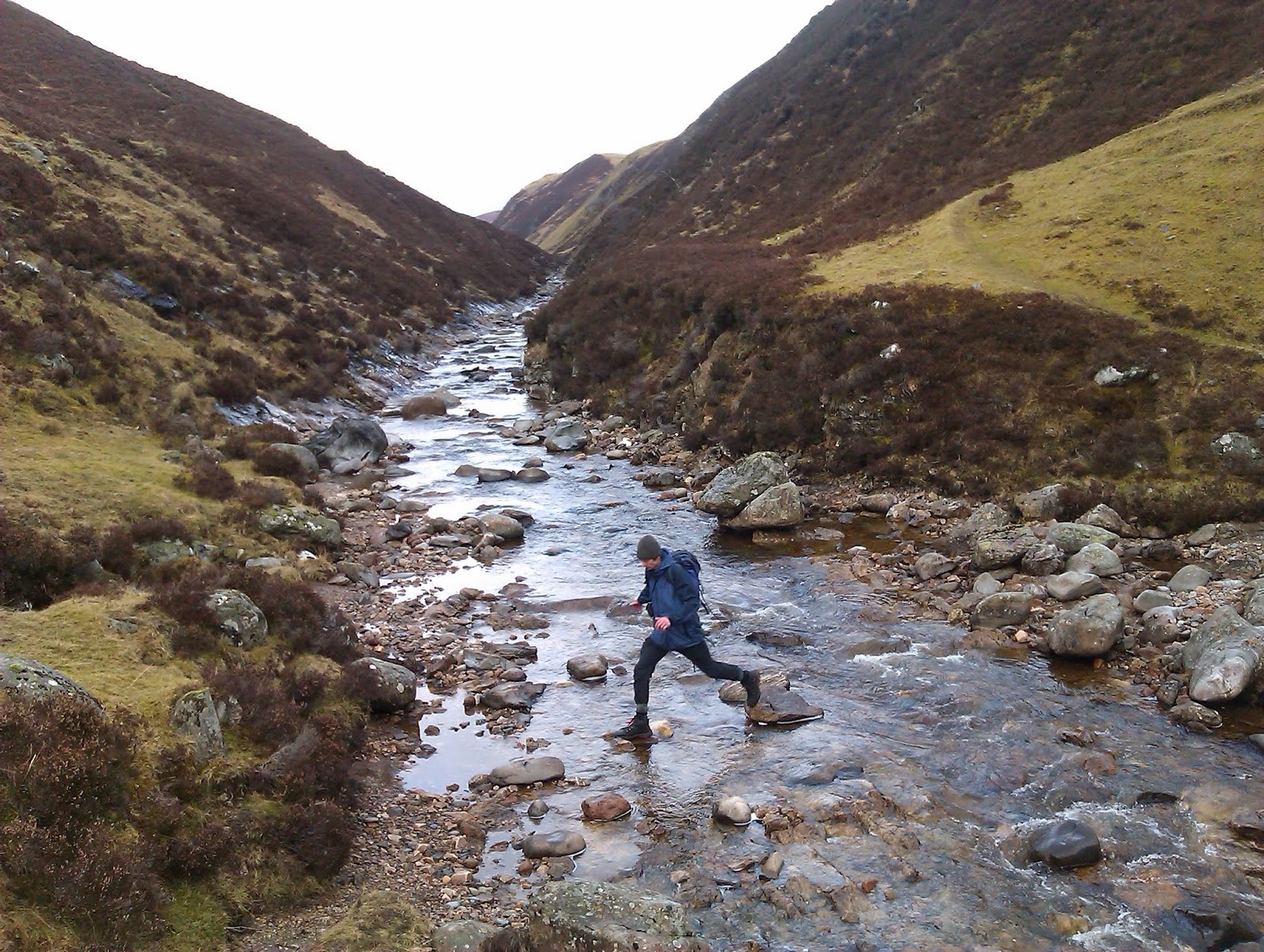 A third night of cold looked to be on the cards, but I remembered a pile of discarded wood next to a shed near where we left the bikes, and so I filled my rucksack with about 25KG's of fuel. With the aid of some firelighters left in the bothy we got a great fire going and actually raised the temperature to 11C, which felt positively tropical!

Heat at Last - you just have to carry the fuel 2.5 miles! 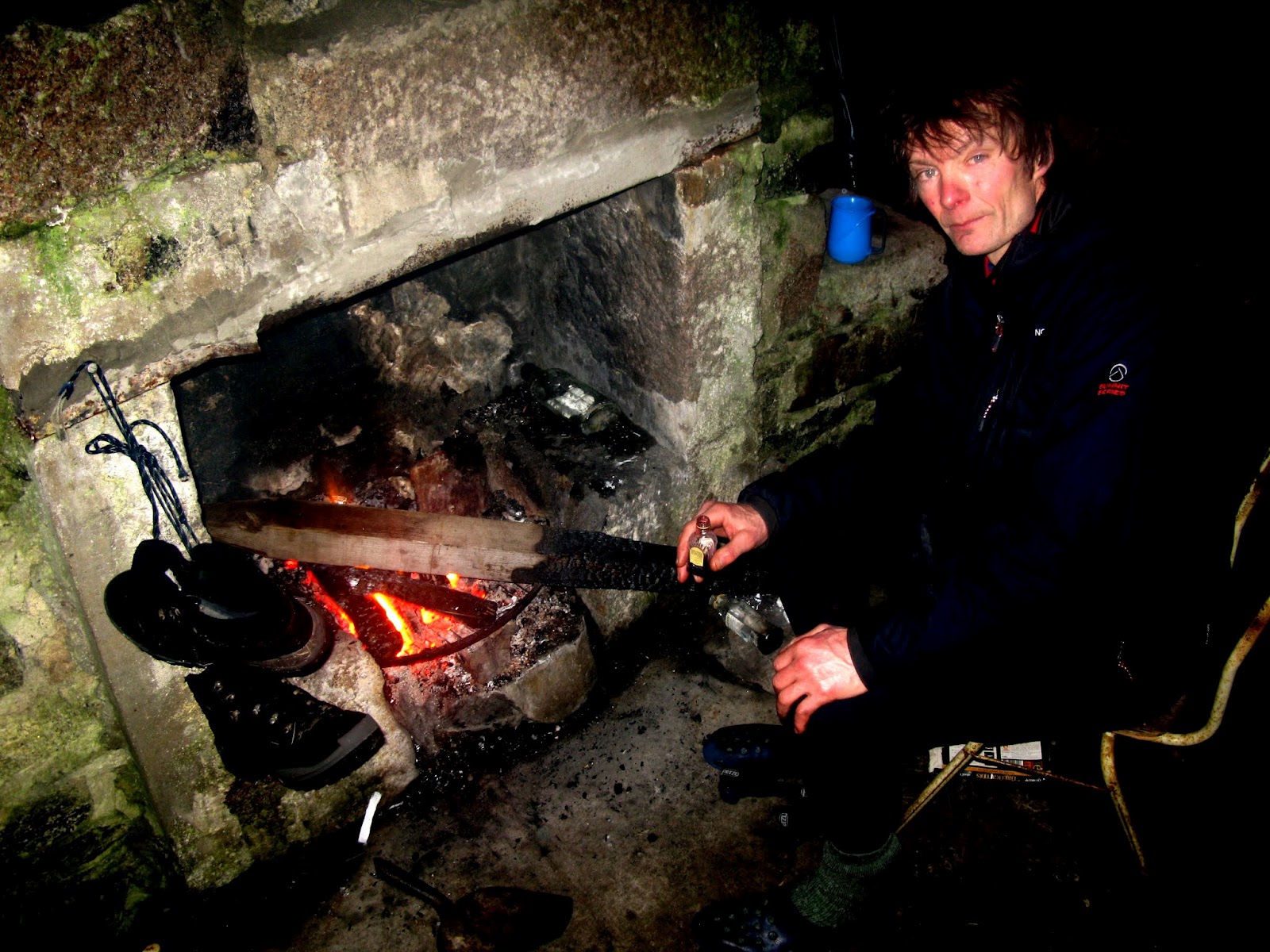 Despite little rain the melting snow had raised the level of the "burn" we had to cross and we resorted to throwing our kit over before our final walk back to the bikes and the 12 mile pedal back to civilisation. 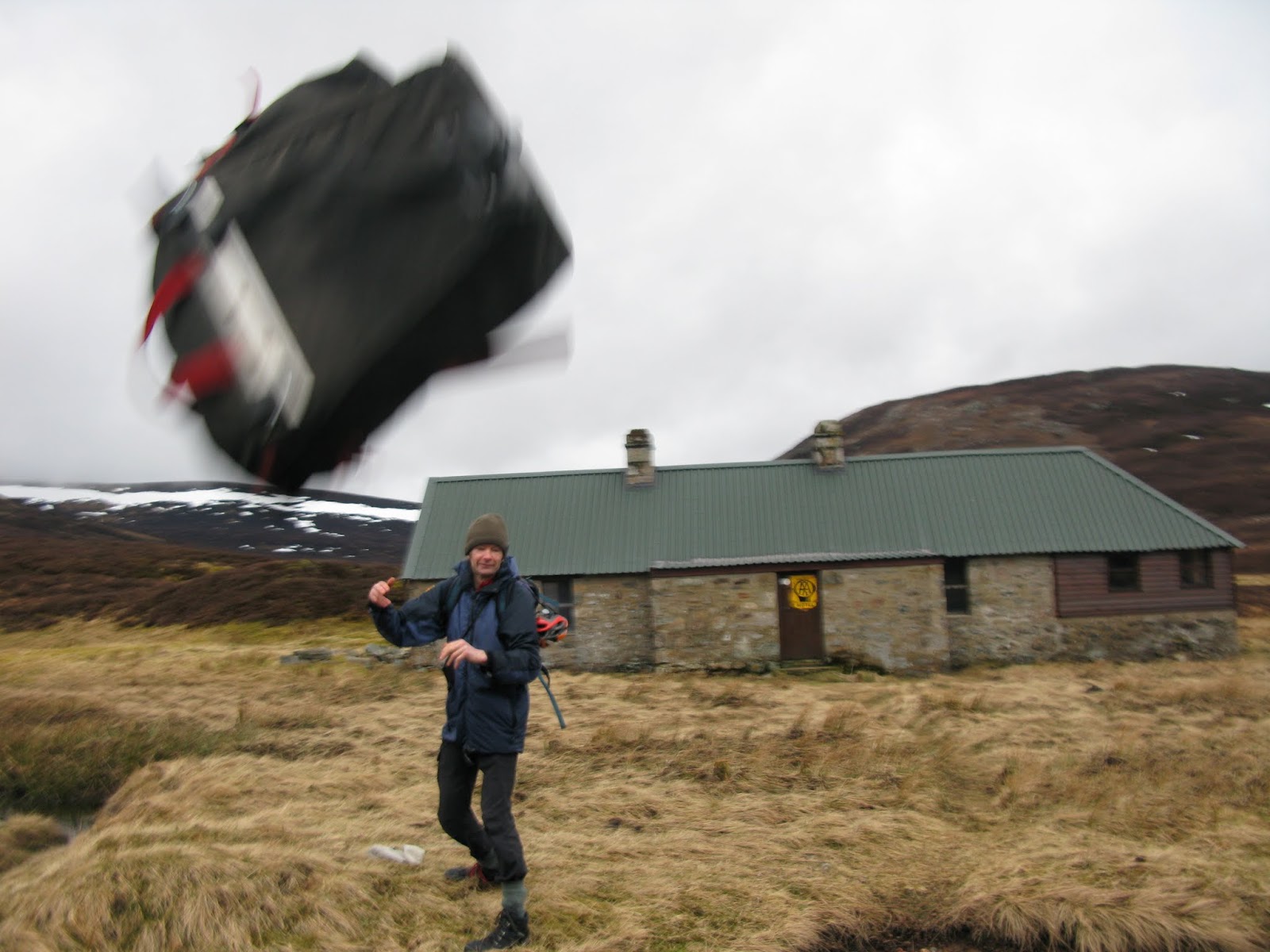 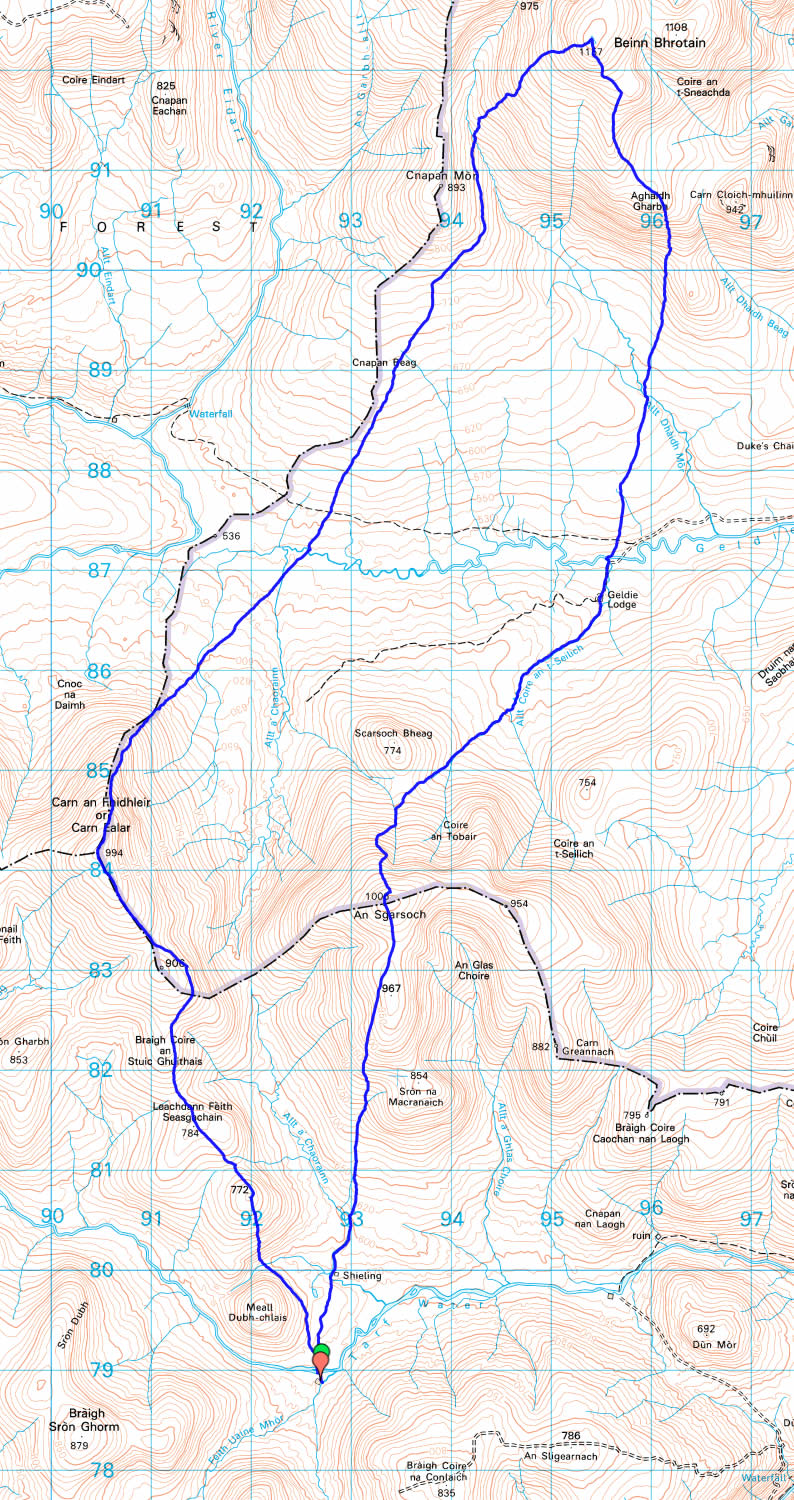