A new event and a new challenge in a very special area of Scotland. The CELTMAN really did appeal to me, and the fact that the swim started at Shieldaig, a small village were I used to go on holiday as a child gave it extra meaning. Being a strong cyclist the long 202km bike section would suit me, and the 40km mountain run over Ben Eighe would certainly be special, I love the Scottish mountains. However the 3.8 kms sea swim that started the event would be a big challenge for me.

Training properly for such an event is obviously pretty important. Having done 2 long distance triathlons (Embrunman in 2011 and 2009) I thought the distances should be OK, but having to tackle 4,000 feet of climbing in the last half of the run would be unknown territory, this was normally the point at which my legs turned to jelly!

Things went pretty well for me in 2011, completing 3 big mountain challenges (Winter Bob Graham, Ramsay Round, Paddy Buckley Round) followed by Embrunman Triathlon in France in the summer. A good winters training with fellow COLT (City of Lancaster Triathlon) members (including an epic weeks cycling in the Costa Blanca) and some long fell runs with John Carr and Ian Richardson meant 2012 was starting well.

The first event of 2012 was the Haworth Hobble 50kms trail race.True to its name I ended up hobbling with a pulled calf muscle after 30kms, but determined not to let my fitness lapse I did complete the Hardmoors 55 mile trail race the following weekend, with the same calf strain making it tough going.

The calf strain subsided and I managed to avoid my normal ankle sprains and by mid April was feeling confident. Then a trip to Egypt to try Kitesurfing introduced a new challenge!

A badly twisted ankle? No, a broken Fibula! 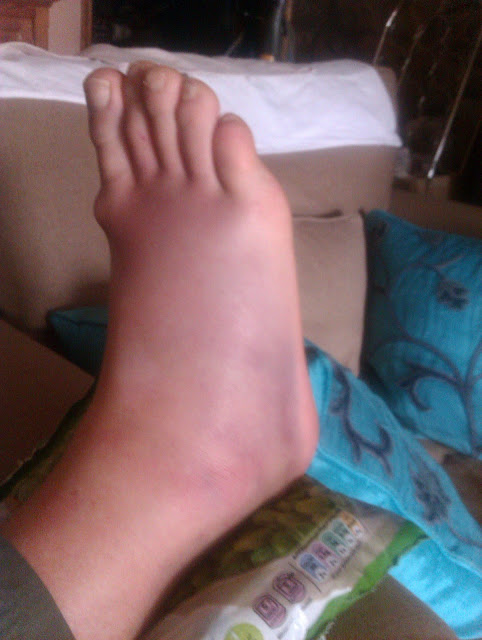 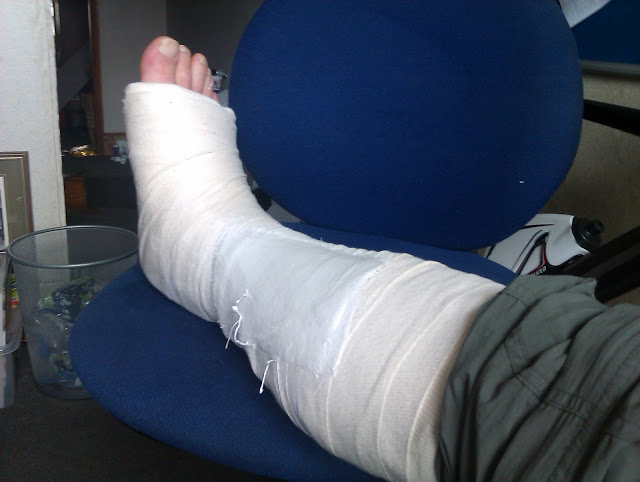 On April 26th I had a plaster put on, and was told it would be removed on the 9th June. Which basically meant I had virtually no chance of completing any events until the Autumn. However a good friend who was a GP and also had a similar injury last year advised that I could remove the plaster early if I was careful, and that the sooner I loaded it the better it would heal. So my plan was to maintain fitness however I could and try and get back walking/jogging by the end of May so at least I would have a chance of completing the course. I was confident the CELTMAN cycle and swim would not be too unrealistic, so perhaps I had a chance, even if I walked the whole run route?

I borrowed a rowing machine, and did some one tough one hour long one-legged rowing sessions with my leg suspended by a rope, that was hard! Gradually over a two week period I started to use by bad leg on the rower as the pain eased. I even managed some swimming with a waterproof cast cover. By 16th May I had had enough of the plaster, and invited some friends around to cut it off!

What a shock, my right calf was like jelly and had withered away to nothing, for the first few days even trying to do a slight toe raise was impossible, my leg would vibrate like a sewing machine!. I got on the bike that first week and managed around 300kms (mainly using my left leg), and my leg and ankle seemed to benefit the more I did.

Walking was still tough and my participation in a "warm up" event, Coniston Old Man middle distance Tri on the 3rd of June was doubtful. I managed a few short miles jog/walk in a pair of nice padded Hoka Mufate shoes a few days before and decided to give it a go with my fellow COLTs. I could always walk the 16kms mountain run. A cold swim and a very hilly bike all went well, and starting the run I just had to be very cautious, it was frustrating letting people run past me, but held my place on the steep uphills where fast walking was as good as running. Traversing anything with a slope was very uncomfortable though, and I was paranoid about going over on my ankle, even with big supports. Eventually I reached the finish line, 20th place was better than I had hoped, and now I knew I had a chance of making the start line at least at CELTMAN on the 24th June.

More cycling and swimming followed, and I arranged a couple of big hill days where I could perhaps get some running fitness on even ground 10 days before the event. Hill reps up and down Skiddaw gave my 25kms and 2,500 metres of ascent and decent on good paths using an ankle support, and another steady 25ms the following day was just within my capabilities. Each time my ankle felt a bit better, but I knew now I had to rest.

The long journey north was on, and allowing a few extra days before the event I walked around the key running section with my Support Runner Phil Whiting. A cool but incredibly clear day saw us get a bit dehydrated, and pretty tired by the time we completed this section. It suddenly dawned on me what a big challenge this was, tackling that route after the swim, cycle and 10 miles of trail running suddenly seemed very daunting!

Cold swim on the run route

A couple more days rest in the idyllic village of Shieldaig followed as excitment mounted and more COLT team members arrived. June 23rd 2012 proved to be a special day, with the atmospheric swim back to Shieldaig to start with. The water was around 10c, but the sunrise as we swam across the bay was amazing enough to distract from the numb hands. Looking down into the water there were many jelly fish - and sometimes you would scoop one! A bit disconcerting.

just over 1 hour for 3.1kms of cold swimming 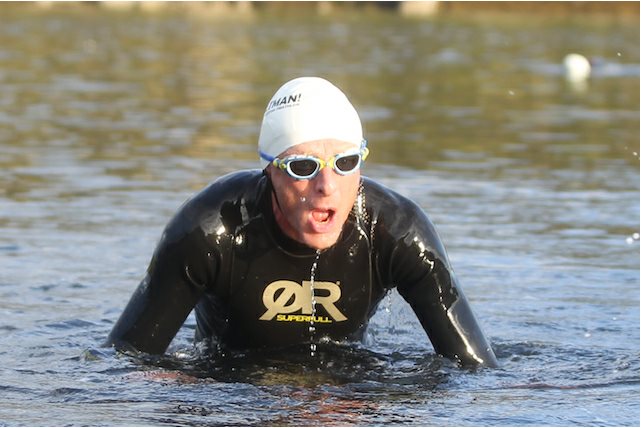 The 202 kms bike ride through the Torridonian landscape was where my race started, exiting the water in about 100th position by the time I got to T2 I was approximately 15th, I had been well looked after by the COLT support crew. Now 7.30 hours into the race I was unsure how much energy I had left as I sat in the cold rain of a sudden and unexpected downpour and the start of the trail run.

Starting the bike - It took 80kms for my feet to warm up!

Hard work maintaining the aero postion for over 200kms 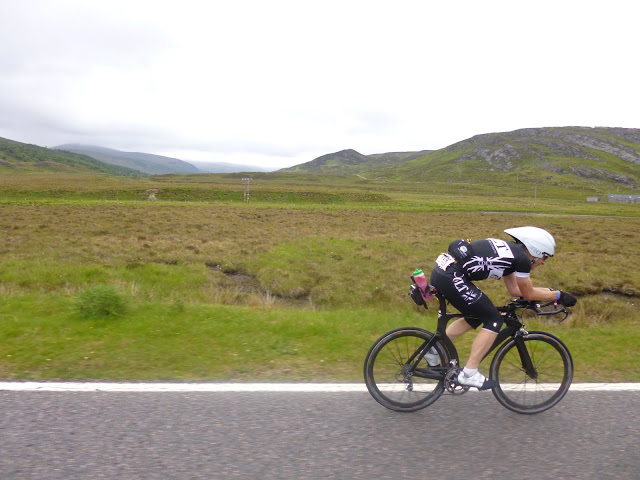 Starting the run my legs felt really good, what a suprise, but my ankle was far from perfect so I concentrated on every step looking for the smoothest route. An initial slimb was followed by a long decent and I picked up a few places, and enjoyed the feed stations.

8 miles into the run 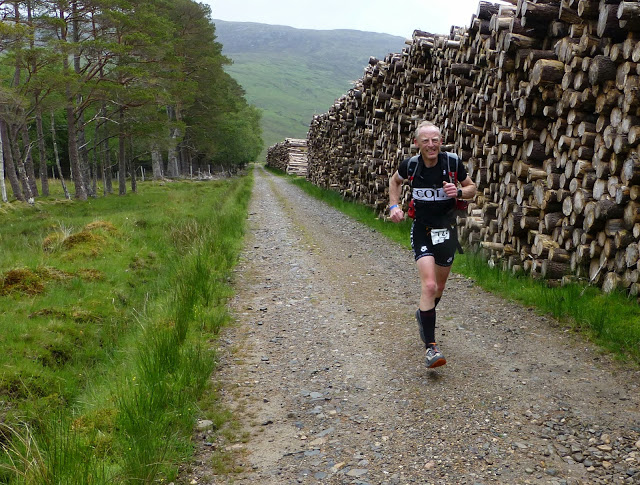 T2a loomed and I was passed by a slim guy who seemed to have an extra few gears! After the kit check the long 3,000 foot climb did at least offer a change of pace, and using walking poles to get my arms working I gained a couple of places by the time we passed the bag-piper on the first summit. 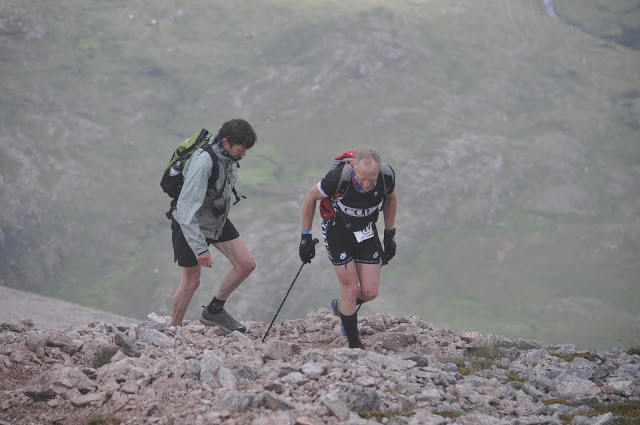 Then it was into the mist before rough ground up to the second peak, and a chance to see competitors in front and behind on the out and back section. I had potential to gain or loose a few places. I was told I was in 9th position, fantastic, but the worry now was my ankle, would let me down on the descent and long trail out to the finish on the road?

Suddenly we were alone, no one in front or behind as we rattled down the scree slopes of the big descent. This was the only secion we had not checked out on our recce as we had looked for a direct descent from the last summit (no longer allowed). A choice of footpaths confused us and we ended up on some poor sections of path before passing a Mountain Rescue guy and rejoining a bigger path by the lake.

It turns out I was sandwiched between Andreas Murgler from Germany and Johan Nykvist from Sweden. Johan gradually appeared in front of me, and with a few miles of trail running left we were just on their heels, but I was concentrating hard on making sure I did not twist my ankle. After following Johan and his support for a few minutes we passed and they tagged on behind us, but we were not dropping them. I increased the pace to try and make a gap, but there was no shaking them! I could hear the Scandinavian chatter but had no ideas what was being discussed, but suddenly they stopped and we were on our own again.

Hitting the road with ankle intact was great, a quick change of footwear and Phil ran with me on the very gradual descent of 6kms to the finish.I pestered Phil to check who was behind, "No one" he said every time. That was until about 2kms to go and then there were two people chasing he said! The flying German Andreas was chasing me down, I increased my pace as much as I could (and did two 4 minute kms to finish!). With about 200 metres to go Andreas was just 50 metres behind, and we were bamboozled by two BIG green arrows at the edge of the village pointing to the right - were these for the run course? We stopped and discussed, we asked a passer by and they confirmed straight on. However it was too late to fend off Andreas' awesome finishing speed and he shot past me with just a few metres to go! I walked across the line in 9th place, it was not the finish I expected after 13 hours of racing to have a sprint like that was bizarre. 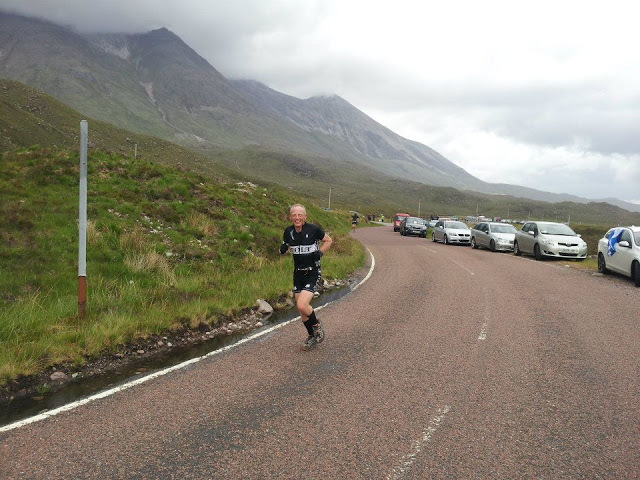 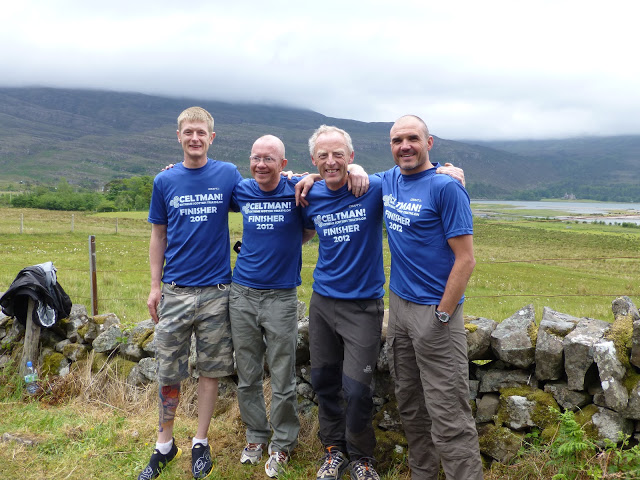 Thanks to Paul McGreal for organising the event, and all the other helpers who made it happen. Plus of course my support crew Phil, Dick, Sharon and Emma. CELTMAN is destined to become a classic, and it was a privelege to be there at the start.