Two years ago Alistair and myself did our first long distance triathlon at this event based in the Southern Alps. We were both keen to go back to give it another go.

We had both gained experience from several more half Ironman triathlons and I personally felt better equipped to put in a better performance after much more long distance training including several tough training weeks in Spain with "Crazy Ian", lots of tough Saturday morning rides with the City of Lancaster Triathlon Club - C.O.L.T. and also two years of long distance fell running including two Bob Graham Rounds a Ramsay and a Paddy Buckley Round. Surely some of that should help? Last time I also had a bad calf muscle tear that made running very painful. In 2009 I had completed the event with its gruelling Alpine cycling leg over the Col D'Izoard of 185kms and 11,000 feet of climbing in 14.30 hours. I was hoping to knock well over an hour of this time.

Staying in a rented flat in the busy little tourist town that the triathlon takes its name from proved ideal. The run route actually went past the front door. And on our second visit here registration and getting set up was all pretty straight forward.

Bike ready in transition the day before 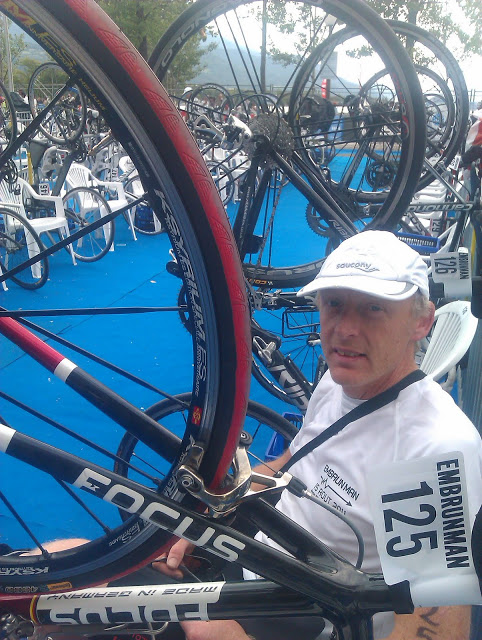 The pre race briefing seemed to go on forever in the baking late afternoon heat and threw up more questions than answers. Alistair unfortunately was not feeling 100 % with a chesty cough and lack of sleep.

However we arrived in transition at 5.00 am and despite some further confusion about the practice swim we made the dash into the lake for the standing start at 6am with the 1000 other starters.

Two laps of the warm shallow boating lake at 22c went fine with the day dawning about halfway through the swim. The early morning sunlight hitting the summits around the lake makes this a stunning venue. I noticed one guy next to me swimming without goggles, not quite sure why you would do that!

Alistair was already in transition when I arrived and we had both improved a bit from 2 years ago, but was still only 737 out of the 1,000 starters) One guy close to us got a red penalty card for blatant nudity and gesticulated with the referee with more than two hands!

Two years ago I had headed off too fast on the initial climb so this time I rode quite strickly to heart rate trying to keep below 150 (my max is 175) and average no higher than 140. Even so I was faster over the first 20 mainly uphill kms than I was before by a few minutes. I had made a note of times for each 20kms and stuck it to my crossbar as a reference. Despite being just 7.30 am it was already warming up as we passed through small Alpine villages before the technical narrow and twisting descent back to the lake, this route doesn't mess about - you do 1,500 feet of climbing in the first 3 miles. The next section along the lake is about the only section of the route that you could describe as flat and it felt good to cruise along at 35/40 kph for a few kms. Next the return through Embrun with the roads lined with supporters. The cyclist in front of me signalled for the crowd to increase the volume even moreand we rode through a wall of sound. I employed this technique later on the run to great effect and the crowds never failed to respond.

Dropping back down to a river the air felt cold, but nowhere near cold enough to require a jacket like some of the French and Spanish riders who must have been far more acclimatised to the heat. One lady spectator told me I should zip my top up, worried that I might get cold?!

3 hours into the ride and I was on the toughest part of the main climb of the Col D'Izoard. This is a straight road at 10% for about 5 kms with no escape from the rapidly increasing heat. I had gained a few more minutes on my previous schedule but was careful not to race other riders who came past me. Even with the highest point of the route coming up there was still plenty of ascent in even hotter conditions to come.

The spectacular Alpine scenery distracted from the effort needed as did the continual interest of Continental tri teams kit. Levens has a big tri club it seems! Different pronunciation to the Levens South of Kendal though. Then I spotted a tri top with Braintree on the side, time for a brief chat before concentrating on the final sections, past the memorial to Coppi and Bobbet. 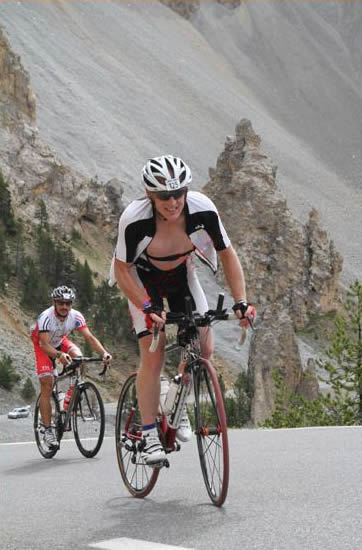 I was pleased to be 20 minutes up on my previous time at the summit and stopped for the first time to refill water bottles. I thought I may as well get the benefit of extra momentum on the fantastic descent to come.

Just a few weeks ago Andy Schlek was riding away from the peleton in the Tour de France and the roads were still covered in fresh graffiti including one saying "Cadel this way" with an arrow hoping to guide him off the road. With all traffic going one way you are free to let rip on the descents, cut corners and crank it over on the many hairpins. I overtook a race refs motobike and made the most of it. At one point I glanced down at my speedo, 80kph!

All to soon you arrive in Briancon and speed through the junctions and cheering crowds onto a fast section of mainroad before what is perhaps the toughest section of the bike course. 3 big climbs into a headwind with the temperature on my Garmin gps now reading above 30c. I picked up lots of places on this section but still watched my heart rate. The final climb of around 1,000 feet is a real sting in the tail and has a technical uneven descent to transition.

7 hours 22 mins on the bike meant I had improved 40 minutes and gained 483 positions, but more importantly I felt 'intact' although I took a painkiller to take the edge off a slight headache caused by the heat.

Two years ago the run had been arduous from the start. This is a tough run course as well with over 2,000 feet of climbing, but this time my legs felt great and along the first flat sections of gravel track I ran comfortably at 5.30 minute kilometres, which was really pleasing. My son Matty and Alistairs wife Emma were at the 4kms point and I told them all was going well. There is a steep ascent of over 300 feet up to the town but the reward is deafening support with drum beating and cheering through the narrow streets and market square, this really spurs you on. Plenty of sponges and cold water every few kms also help. Descending from the town Alistair spotted me as he was heading onto the final section of the bike course. It was great to know that he was still going strong.

I was overtaking quite a few people on the downhills and completed the first half of the run in 2 hours. You wear a paper necklace for the second lap so you can tell who is on the first lap or second lap. It was surprising to see how sleek and stylish some of the runners were who were 20kms behind me. Suddenly at 25kms I hit the 'wall'. From cruising and enjoying the run my legs were tiring, I had to walk the uphills and the downhills became very painful. The feed stations became vital, not for food especially but for a good soaking with the sponges to cool down in the scorching afternoon heat. All I could do was grind out the kms and hang in there. On the last run through the crowds in the village I signalled for more volume and the result was awesome, a real buzz.

The hot southerly wind made it worthwhile tucking in behind people if the pace was OK. At one point I overtook a couple of 2nd lappers who then tucked in behind me on the last hill, This made me determined to keep the pace going and eventually I heard them both fade and start walking. Very satisfying!

I passed Alistair going the other way (he was starting his second lap and still looked strong) and high fived with just a couple of kms to go. 13 hours 12 mins gone and I came into the finishing straight and demanded 'more volume' from the crowd. 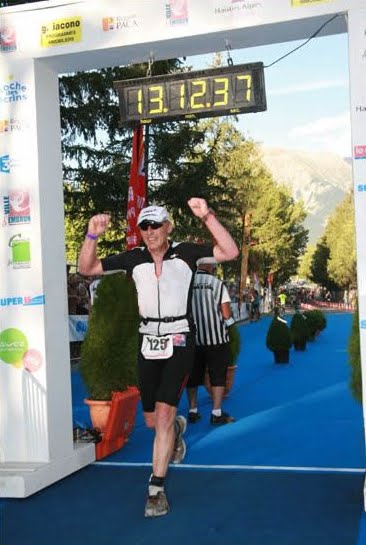 The last 2 hours had been very tough but I was elated by my result. 190th overall and 19th in the V2 age category. I hadn't dropped any positions in the run. In fact I had gained 90 positions overall.

Alistair also made it back to complete his second Embrunman.

Below are records of the elevation gains in bike and run. 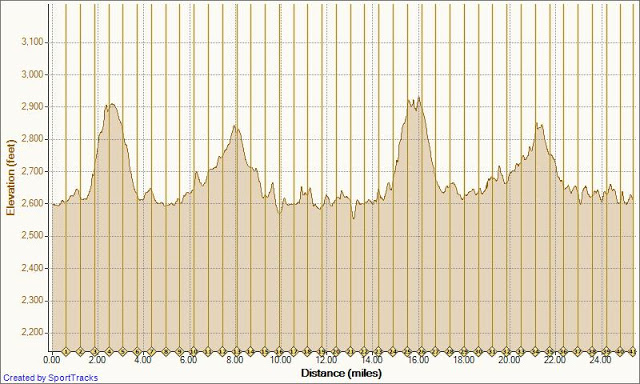 Relaxing the next day 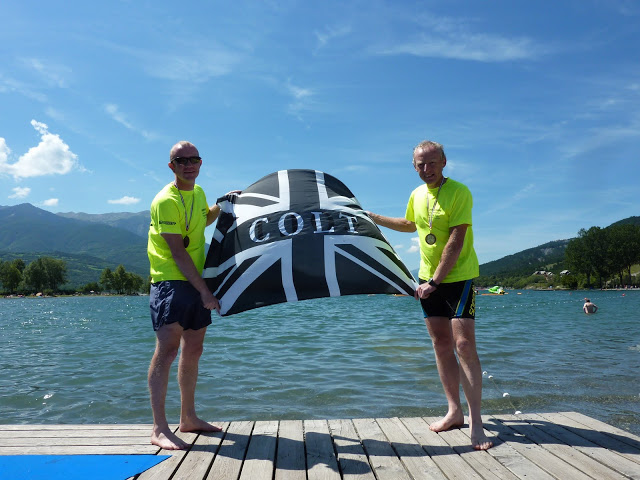