Dream of a Classic Dream

An ascent of Dream of White Horses, Gogarth, Anglesey UK. By Sharon Gerrish.

Was it the name, or was it the atmospheric, grainy black and white photograph of tiny figures suspended on a huge rockface with white spray pounding below, that had us driving along the M62 at 7.00am in late August? For three years, since I had started climbing I had had this dream, this, "Dream Of White Horses." Seen years ago in, "Hard Rock," beyond me, I never dreamt that I could also suspend myself from that sheer face. We pulled up at 9.30 into North Stack car park. Another car was there, climbers slowly packing large sacks of gear. I felt sick. Why was I there, I'm not a climber. What excuse can I use for not doing it now? The wind blew strongly, cold from the North West. "It'll be straight onto the face, it'll be too cold to climb," I said hopefully. "Last time I did it, it was raining," said my climbing partner, "It probably won't be so bad at the bottom."

The walk to North Stack was tense. We talked remembering the last time I had been there with a child of two in a backpack. I'd got lost on Hollyhead mountain, sense of direction gone, desperate to get back to the safety of the car. "God I don't like this place, it's scary and full of bad memories." I'm getting more scared by the minute. We're beaten to the route by the other climbers so to waste time we scramble down to view Wen Zawn. As I descend slowly, uncertain of the path, it's height above the sea and steep, slippery rocks my body cools rapidly in the North wind. Surely it's too cold to climb but my partner is happily pointing out the finer points of the climb. He's too sure of himself. We gear up. Sandwiches and coffee drunk slowly to stretch the inevitable moment. "Take care on the walk to the abseil," my partner says. He doesn't mention the sheer drops of 90 metres to the sea far below, that make me even less confident. Abseil quickly rigged and he disappears down the rope. Suddenly all my skills vanish. Hours of putting my ATC on ropes at the climbing wall last winter goes from my mind. "How will I attach myself to the rope?" "All clear, I've got a belay, come on down." I fix myself to the rope. It comes back, the relief of starting clears my forgetfulness. I make an awkward move over the top, thread myself through a crack in the block and I'm off. Slowly, carefully but then, "This is it, I'm on my way to do Dream." I relax a bit and start to enjoy myself. 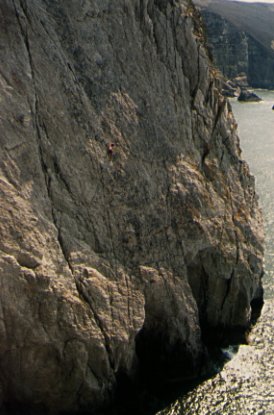 The first pitch is steep but not vertical. Huge holds appear when they are needed. I reach two runners and the pitch starts to traverse left across the face. "I must be near the place where the wave crashed and the small bodies were caught for ever on film during that first ascent." Hung on the first belay, trusting the gear to hang out into space, "It's an unnatural feeling placing your weight on two small lumps of metal stuck in the rock." I'm getting cold now. There isn't any shelter down here, the wind does blow straight onto the face. I put on my waterproof coat and huddle down into the collar to shelter from the wind. 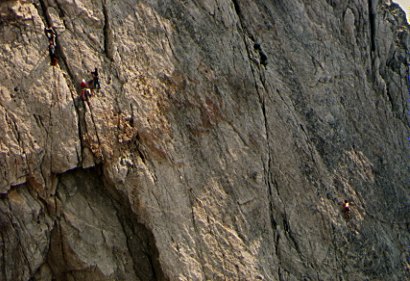 Two pitches later, moving slowly to accommodate the speed of the pair climbing in front of us I am belayed in a chimney of what looks like rubble glued together with cement. In front of me the amphitheater that makes up the final pitch swoops away to the left with the stomach churning exposure of Wen Zawn falling away below it. "What happens if I fall? Where will I end up?" I check that my prussic loops are still attached to my harness but would I know how to use them dangling in space 40 metres above the sea? "I'll fix as many runners as I can to protect your moves," I dimly hear my partner say as he moves off across the steep slab. I can see the sun just away to my left. "If only I was in it," I reason, "I would be warm and this pitch would be easy." I try to kid myself but I know that it's the great drop, the awesome position of the pitch that is scaring me. The rope steadily creeps out, draped between the runners across the traverse, a stream of advice about this move and that floats back to me, then he's gone and suddenly he's at the top.

On the Last Pitch

I move off, stiffly from hanging in the cold. The holds are big and maybe it's not as bad as I thought. I remove a runner, climb down and around a small rib of rock and then stretch back to remove the next runner. It won't move. I climb up higher to wriggle it hanging on in an uncomfortable position. Ten minutes of working at the stubborn piece of metal and I'm getting scared. Arms pumping as they grip harder than they should. In the end I reluctantly remove the quickdraw and leave my first ever runner behind. A few minutes later I followed the rope around a corner and there above me was my partner, sunlit in the clear blue sky. A few more moves and I had done it. On the way home in the car we were tired. We had drunk tea in the cafe and talked about the exposure, the cold, the slow climbers in front. We had relived the moves and looked forward to the photos that would show our success. I felt elated enough to volunteer to be the first driver on our way home. 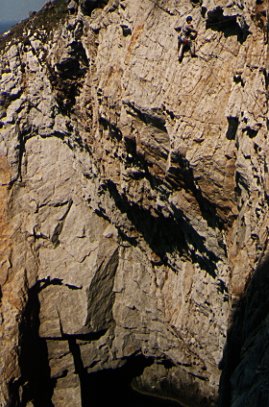 As I drove along the M56 I thought about my achievements but soon the warm glow of success turned to a weary sleepiness. We changed drivers. I settled down to dream of my classic dream......until..........the engine went BANG! Was my dream really worth £850.