Paddy Buckley Round - and a UK "Three in One" Attempt

After completing a Bob Graham Round in Winter (Feb 2011), and a Ramsay Round in June 2011 the opportunity to complete the triple by completing the Paddy Buckley Round was too good to miss. This has only been done by three people, Adrian Belton and Helen Diamantides in 1989, and Jon Chapman in 2008, although Mike Hartley did incredibly comeplete all three consecutively in 1990 finishing with a 33 hour Paddy Buckley Round.

My preparation was far from perfect, with a tough overnight outing supporting a Bob Graham Round in grim weather conditions just 4 days prior to the scheduled date of 20th July. But the forecast looked good and with a few people able to support a midweek attempt it was all systems go!

I had checked out the two toughest legs in terms of navigation a couple of weeks before, but much of it was still unknown and I was very fortunate to enlist the help of some seasoned Paddy Buckley Runners, as well as some of my previous helpers on other rounds. The Ramsay Round in Scotland had been a "shoestring" attempt, but I knew without decent support the Paddy Buckley would be a real struggle.

Although it doesn't have as much ascent as the Ramsay Round it has the roughest ground and perhaps trickiest navigation of all three rounds, and to date only around 65 people have completed it in under 24 hours, although officially it is not a 24 hour challenge most people attempt to complete it within a day. 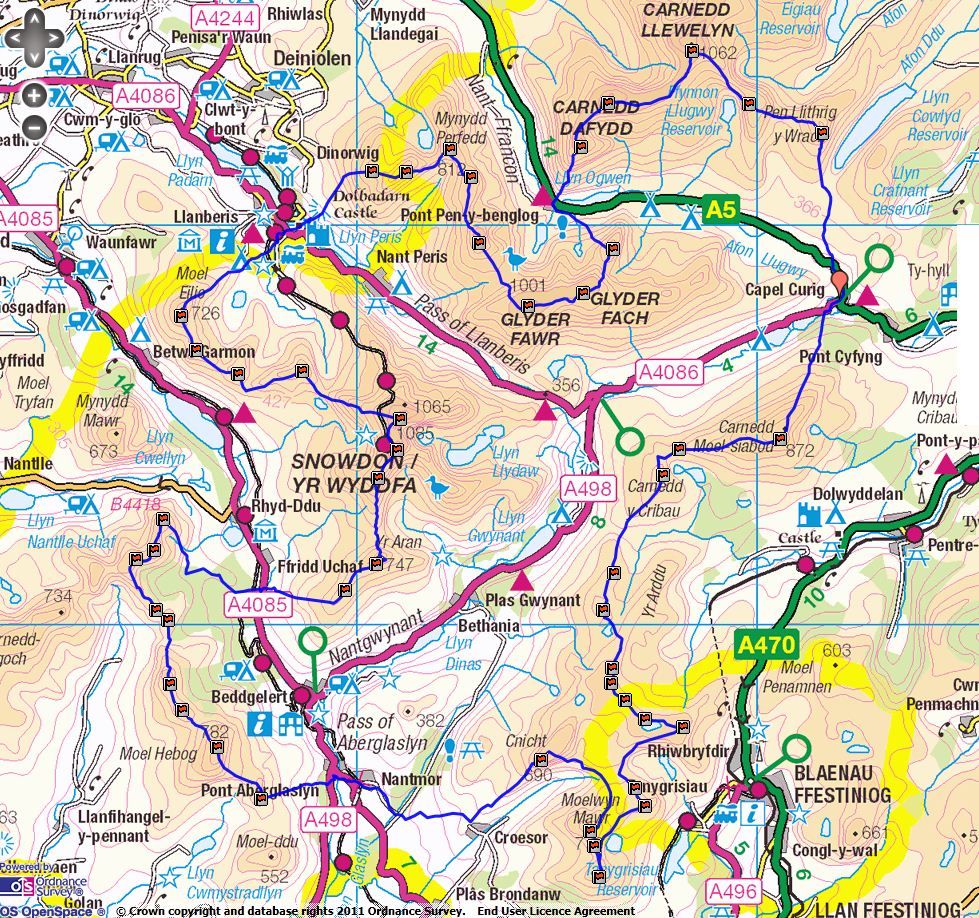 I'm fast asleep in the camper van in the carpark behind Joe Browns shop in Capel Curing, the hills are shrouded in cloud and things are looking a bit damp, I am hoping the forecast is correct.

July 20th - 9 am
After a really good nights sleep Alistair (who came down with me) and myself are woken by a phone message from Andy and Ian, they are 10 minutes away after driving down from Lancaster after an early start. We get up quickly and get the kettle on. For such a simple activity (running over hills) there always seems a lot to think about! The last few days have been spent trying to think of every last detail, it's sometimes the small things that can make all the difference.

10 am
Ant and Jon arrive from Leek, the fellrunning community is full of people that help each other out, and I struck lucky here for sure. The have both done the Paddy Buckley and know the first section really well, plus they have a great sense of humour! They do warn me though that the previous Saturday some of the bogs were waist deep! 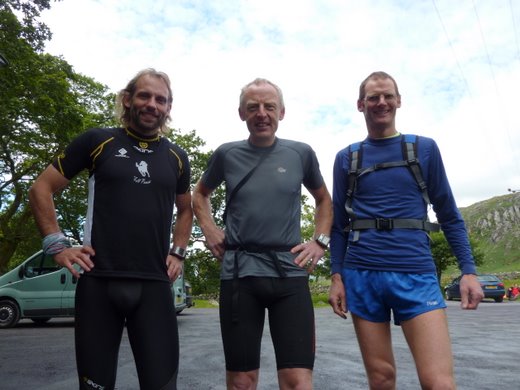 11am
Leaving the grassy island at the Capel Curig junction we head South, through the grounds of Plas Y Brenin and onto the slopes of Moel Siabod. There are a few fluffy clouds and a slight northerly wind - perfect conditions.

Midday
The first summit is done ahead of schedule, Jon is a bit concerned I'm going too fast and warns me a few recent attempts he has supported have started fast and failed to finish. 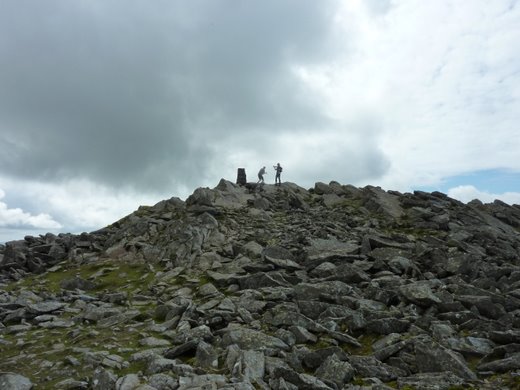 1pm
Just approaching Moel Meirch, a small rocky summit typical of this section, get the lines wrong on approach and descent and you will be floundering through deep heather and bog. Plus you might get electrocuted by the fencing around here! 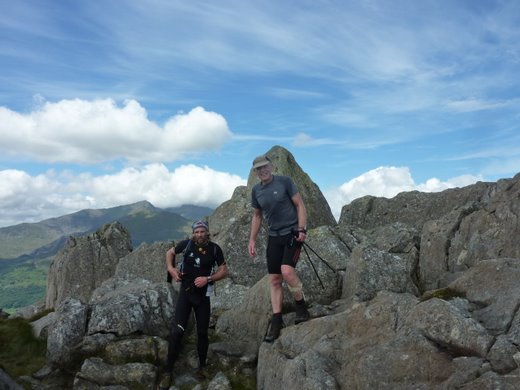 2pm
We've passed Allt Fawr - over 15 minutes up on the schedule, but the pace feels reasonable and now we are past the boggiest bits of leg 1 and the running is good. Soon we are down at the mine buildings and meet Alistair and Ian who have walked in from Tan-y-grisiau with some welcomed refreshements. The support crew have been playing

3pm
Moelwyn Bach is the most southerly point of the round, Jon continues to crack the jokes!

4pm
The final climb of leg one to Cnicht. The weather is perfect still, sunny and cool. Fantastic views over the whole of the remainder of the round - the Carneddi look a long way away! Video 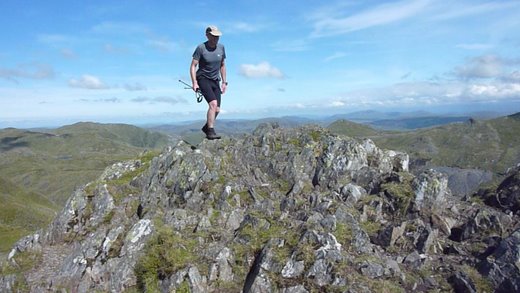 5pm
Approaching Nantmoor we are met by Alistair, and I change into road shoes for the short section on the lanes to Aberglaslyn. Jon and Ant have done a fantastic job for me, perfect lines made it as easy as it could be and I arrive over 30 minutes ahead of schedule. Caz Phillips and Andy are waiting for the next section, and Caz will carry on and do leg three with me as well. Ian has plenty of food ready, rice pudding, a pint of tea, and fruit cake. He is keeping everyone else fed and entertained as well!

6pm
Bryn Banog proves to be a tough 1,500 foot ascent with the first mile through rough, tussocky, boggy ground before gaining the open hillside. We arrive at the top having gained another 5 minutes, and despite only having known Caz for an hour the "banter" soon starts up and once again I realise how lucky I have been with my support.

7pm
More rough rocky ground on this section but I am still gaining time on the schedule. Andy is passing me drinks and keeping me well fed. 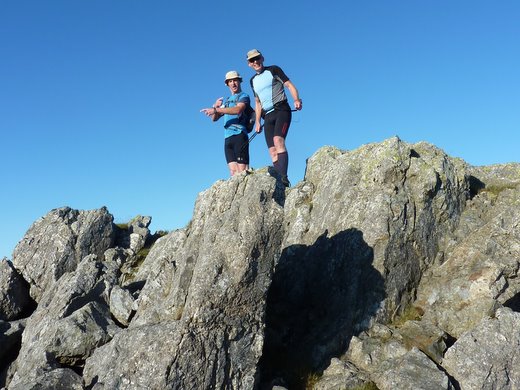 8pm
As late evening approaches I am on the big grassy climb up Trum y Ddysgl, the shadows are growing longer but it's a perfect temperature for running over the hills. The end of leg two is in sight now! 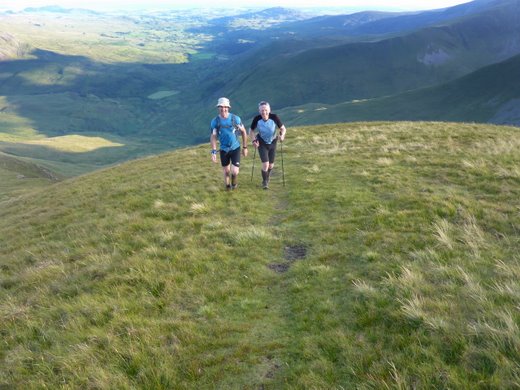 Andy and Tom on Y Garn - last summit on leg 2 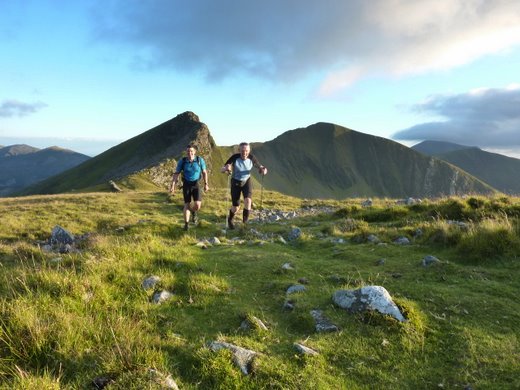 9pm
I'm enjoying a 15 minute break at Pont Cae'r Gors. Andy has finished his support running for the day and so it's just me and Caz over the big hills of the Snowdon range. Even from here the lights of the Snowdon Summit Cafe can easily be seen.

10pm
On the summit of Yr Arran with superb views of the Snowdon range. Yr Arran is shaped like a piece of Toblerone, I think this is actually where they got the design from? Perhaps the Welsh should bring out "Tobleronio". To the west clouds are flowing over the ridges and back lit by a superb deep red sunset.

11pm
Standing on Snowdon Summit , we have had torches on for about 30 minutes, the views are sensational. Winter Hill transmitter near Bolton can clearly be seen, the moon peeps out above the Eastern horizon, and there is not a breath of wind. Walking past the empty cafe/visitor centre is a bit odd as all the lights are on.

Midnight
Heading up Foel Goch a badger is ambling towards us, making the most of the calm evening and probably out eating slugs.

1am
Jogging down from Moel Eilio there are clouds settling in the valley for a while, but suddenly they disperse and we can see the lights of Llanberris clearly. Caz has supported me over 22 very rough miles yet is still talking about going for a run to check out some peaks on the Meirionnydd Round ;ater in the day. Alistair is going to support me on the last two legs.

2am
Less than 20 miles to go, but despite being 1 hour 45 mins up on the schedule it's far from over. My stomach has gone on strike and without eating my energy levels are very low. The thought of food of any kind makes me feel sick! The ascent of Elidir Fach takes nearly 10 minutes longer than it should and we are in hill cloud for the remainder of this leg, although there is still not a breath of wind.

3am
It's a relief to hit the schedule time allowed on the next summit, but I'm still feeling weak. I know if I stop to rest or try and eat I may not be able to start again.

4am
Coming of Y Garn I am still dropping time, but we see the light of Ian Ridgway who has got up in the middle of the night to support me over the last section of this leg. The Glyders are rocky and a navigational mistake now could be very costly. Ian takes a perfect lines to the summit of Glyder Fach and Fawr.

5am
Daylight comes gradually as we descend the rubble strewn gully towards Tryfan. This last peak, which is basically just a huge pile of rocks has to be ticked off before the steep descent to the last support checkpoint.

6am
I'm still not at Ogwen, and dropping time rapidly now on each section. My legs feel fine though and I know from experience that if I can get just some food down me I will pick the pace up again. Ian is cooking up sausage and bacon butties in the van and the smell is appealing to say the least, so I tuck into some, along with some tea and feel a small amount of energy returning.

7am
Pen yr Ole Wen is a big steep climb at the start of this leg, but it doesn't feel too bad. The van disappears from sight as we ascend into clouds again. I hope I will see it again within the next 4 hours.

8am
The drizzle, brisk wind and the poor visibility are making this section tough. Lots of false summits and it hard to pick out the grassy tracks that sould make the going easier. We stick to the ridges which is slow but less risky.

9am
Pen yr Helgi Du is a weird narrow ridge scattered with sheep. in the poor visibility it's like something out ot the "Cat in the Hat" with interlinked steep grassy ramps and overhangings rock walls. Every summit now I am dropping about 8 minutes, I'm glad I had so much time in hand. I have only two speeds - stop, and go.

10am
Pen Llithrig yr Wrach is a little visited summit and Ian finds his way up to welcome me onto the last section ( I had told Alistair that there was no way Ian could find his way up here!). In my mind I have a nice grassy run all the way down to Capel Curig, Caz had said it was "my favourite run". The reality is something else, rough ground, a feint intermittent track, and Capel Curig looks to be miles away - in fact you can't even see it! But by 10am I am walking along the A5 into Capel Curig.

11am
I'm sat down next to the van enjoying a big mug of excellent coffe and a superb sausage and bacon sandwich. I finished with 47 minutes to spare. Caz, Ian and Alistair congratulate me and I get a call from Ant who is keen to know how things worked out.

Thanks again to all my supporters, Ian, Andy, Alistair, Any, Jon, Caz, Iain. This really was a team effort!

Schedule and actual times for a 22:30 clockwise round by Tom Phillips beginning at 11:00hrs